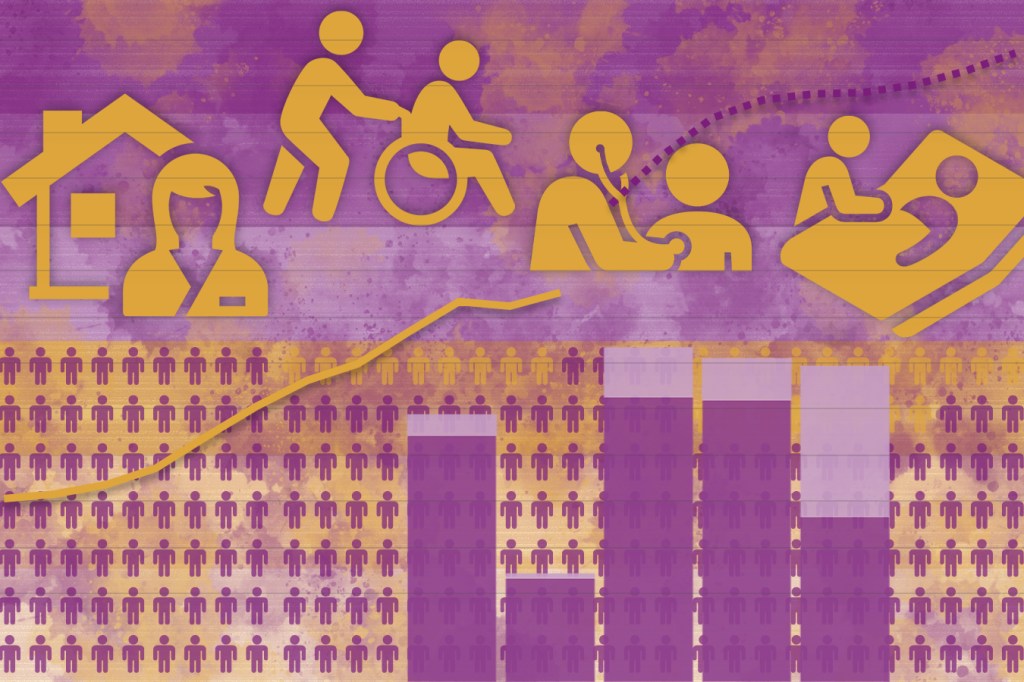 This story can republished for free. Please contact KHNweb@kff.org for embed codes.

Health care for the nation’s seniors looms large as the baby-boom generation ages into retirement. President Joe Biden tacitly acknowledged those needs in March with his proposal to spend $400 billion over the next eight years to improve access to in-home and community-based care.

The swelling population of seniors will far outpace growth in other age groups. That acceleration — and the slower growth in other age groups — could leave many older Americans with less family to rely on for help in their later years. Meanwhile, federal officials estimate that more than half of people turning 65 will need long-term care services at some point. That care is expensive and can be hard to find.

Spending for paid long-term care already runs about $409 billion a year. Yet that staggering number doesn’t begin to reflect the real cost. Experts estimate that 1 in 6 Americans provide billions of dollars’ worth of unpaid care to a relative or friend age 50 or older in their home.

As the country weighs Biden’s plan, here’s a quick look at how long-term care works currently and what might lie ahead.

A Variety of Services

More than 65,000 paid, regulated service providers cared for 8 million Americans in 2016, according to the most recent federal report. In addition, AARP estimates more than 50 million people provide unpaid care, generally to family members.

Care that occurs in the home, usually done by an unpaid caregiver or by a health aide, who may be employed by an agency (does not include hospice services).

Supplemental care including services such as adult day care centers and transportation.

Residential facilities that can offer a variety of care levels, including assisted living centers and memory care.

The Cost of Long-Term Care Services

The Physical – And Financial – Burden

The federal-state health care insurance program for low-income and disabled Americans is the single-largest payer of long-term and community-based care and some in-home services. To qualify, many families must “spend down,” or reduce the older adult’s income and assets. And waiting lists for in-home care services in many states are long.

Other public spending comes from different sources, including states, localities, the Veterans Health Administration and the Children’s Health Insurance Program. Over half of this spending covered long-term care services given at residential care facilities for people with various mental health conditions and developmental disabilities.

These costs, paid for by individuals, include deductibles and copays for services as well as the direct payments made toward covering long-term care.