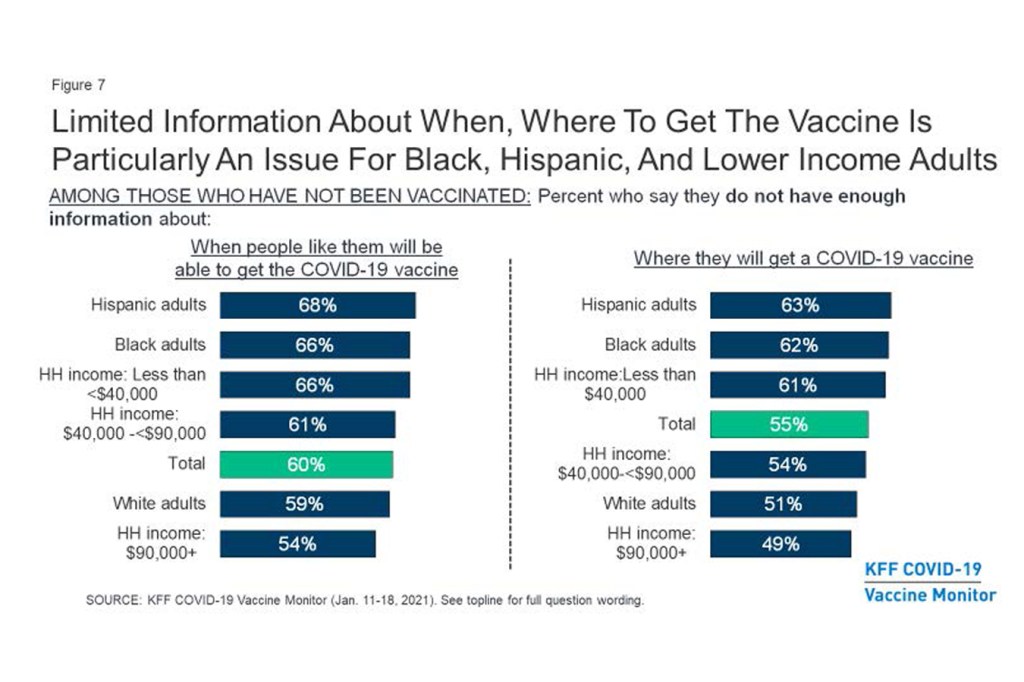 Over a month into a massive vaccination program, most older Americans report they don’t know where or when they can get inoculated for covid-19, according to a poll released Friday.

Nearly 6 in 10 people 65 and older who have not yet gotten a shot said they don’t have enough information about how to get vaccinated, according to the KFF survey. (KHN is an editorially independent program of KFF.)

Older Americans are not the only ones in the dark about  the inoculation process. About 55% of essential workers —designated by public health officials as being near the front of the line for vaccinations — also don’t know when they can get the shots, the survey found. Surprisingly, 21% of health workers said they are unsure about when they will get vaccinated.

Black and Hispanic adults, as well as those in low-income households, are among the groups struggling most to find vaccine information. Within each of those groups, at least two-thirds said they do not have enough information about when they can get vaccinated, the survey found.

The covid vaccines, which were first distributed in mid-December to health care workers and people living in nursing homes or assisted living centers, are now available for other older adults in most states, though age restrictions vary. Ohio, for example, opened up vaccinations to all residents  80 and older. In Virginia, the minimum age for the second wave of shots is 65. In Indiana, it’s 70; Maryland, 75. Some states, such as Florida and Texas, started vaccinating anyone 65 and up in December, though many states did not begin vaccinating all seniors until January.

Limited doses have left many seniors scrambling to get an inoculation appointment.

For example, at 9 a.m. Thursday, Washington, D.C., opened 2,200 covid vaccine appointment slots for people 65 and older in several hard-hit neighborhoods. Within 20 minutes, they were all filled.

To date, more than 15 million Americans have been vaccinated for covid, which has infected 24 million and killed more than 400,000. The two covid vaccines authorized for emergency use by the Food and Drug Administration require two doses either three or four weeks apart.

Despite the rocky rollout of vaccines, two-thirds of respondents were “optimistic” that things will get better.

Sixty-five percent of adults said they believe the distribution of the vaccines is being done fairly, but half of Black adults said they were concerned that the efforts are not adequately considering the needs of the Black community.

The KFF survey of 1,563 adults was conducted Jan. 11-18. The margin of sampling error is plus or minus 3 percentage points.